We’re delighted to hold this exclusive and unique collection of the finest Sheffield Garden Knives.
Extremely useful around the garden, each knife is also a piece of Sheffield history that may ultimately become a gardening companion for life. How incredible it is to think that these traditional handmade pocket knives will have been carried by the gardeners of Victorian Britain’s grand houses. 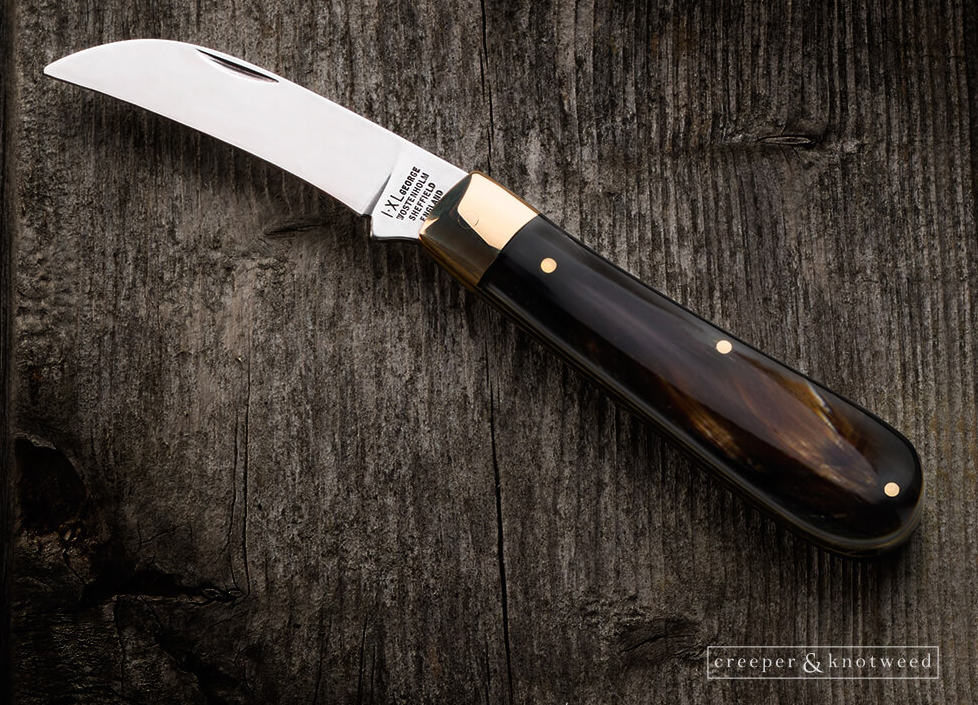 Gardeners’ knives Made in Sheffield 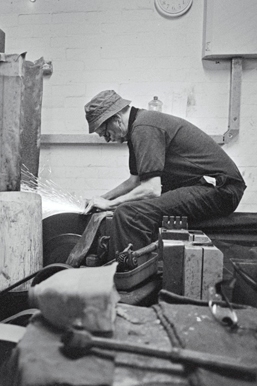 Sheffield Knives for the gardener

A garden knife has many uses including pruning & grafting, taking cuttings, cutting flowers, harvesting veg. slicing string, peeling fruit etc. and that’s why many gardeners regard them as indispensable.

These knives are so useful for gardeners, and with each knife comes all the history and traditional manufacture of a tool that is still made in Sheffield today. We also know that gardeners fully appreciate owning such a piece of history that ultimately becomes a gardening companion, perhaps for life.

How incredible it is to think too that these traditional handmade pocket knives will have been carried by the gardeners of Victorian Britain’s grand houses.

If you would like to understand more about these special Sheffield Knives, we briefly look at the history (below) of the cutlery industry in Sheffield…

The cutlery industry was born in Sheffield in 1297

The cutlery industry was born in Sheffield when the term “cutler” was used on a tax return in 1297, but it was not until the mid to late 1600s that Pocket Knife manufacture began in Sheffield. Back then, they were known then as “Spring Knives”; in other words folding knives held open and closed by a spring along the back.

Sheffield cutlers developed methods to manufacture Pocket Knives in reasonable volumes and at affordable prices and with this, they became more widely available. Their designs developed over the years such that they were useful for almost every occasion and to perform tasks typical of the era – from fine delicate knives used for cutting fruit or for sharpening quills (Pen Knives), through to more robust knives used by coachmen and soldiers.

With Britain’s industrial revolution so Pocket Knife production developed further, and firms like Joseph Rodgers and George Wostenholm became significant exporters of the era, opening up new markets in America, Africa, Australia and other countries around the world.

In the 19th century hundreds of thousands of knives were produced during the wars by companies like Joseph Rodgers, a largely forgotten part of Sheffield’s important war effort, when only Army Knives could be produced with the available steel.

A brief history of Joseph Rodgers

Joseph Rodgers is perhaps rivalled only by George Wostenholm in terms of its importance to Sheffield cutlery and its fame around the world.

Like many of Sheffield cutlery firms, the early history of Joseph Rodgers is a little unclear. It is claimed that a cutler called Joseph or John Rodgers operated out of a building in Hawley Croft close to location of Sheffield’s present day cathedral. In 1730 what are claimed to be his two sons Maurice and Joseph took over.

The mark of The Star and Maltese Cross was originally registered in March 1682 by a Benjamin Rich. However, it is with Rodgers that this mark will forever by associated and they registered it in 1764.

With increasing business in what is thought to have been exclusively Pocket Knives, in around 1780, the firm moved to larger premises at No. 6 Norfolk Street. Eventually, as Rodgers expanded, it would acquire surrounding property until the famous Norfolk Street Works occupied the entire plot. (The property was sold in 1929, and the site, which is now a Bingo Hall, is marked with a plaque.)

Rodgers focused on producing the finest quality knives and looked for the best in every aspect of knife production from materials to workmanship. Each knife was branded with the Star and Cross as a guarantee of its superb quality. It has been claimed that so great was Rodgers reputation for producing only the finest products that the word “Rujjus”, a variation on “Rodgers” entered into the Sinhalese dialect as a general expression of superlative quality. 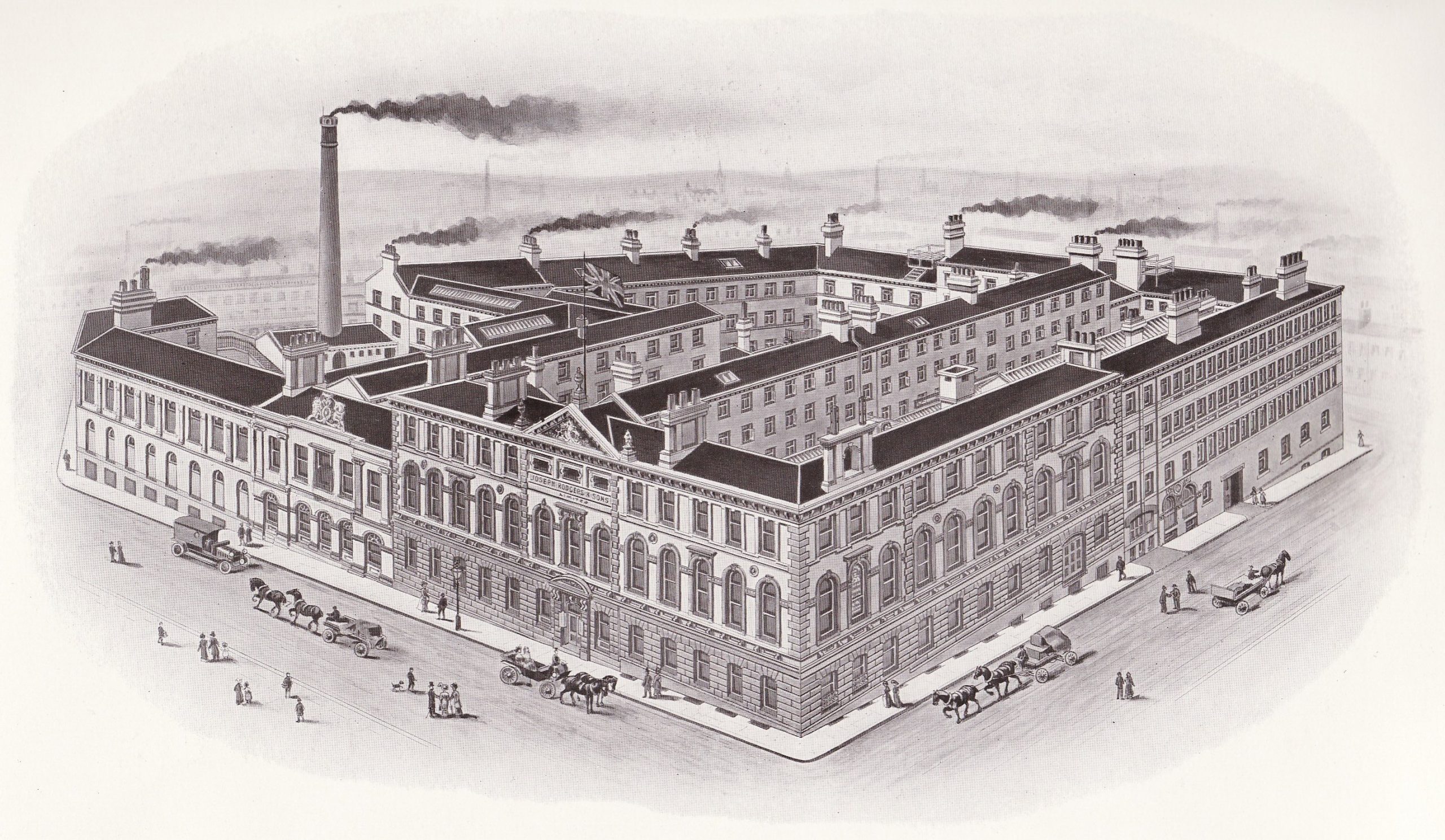 A brief history of George Wostenholm

Along with Joseph Rodgers, George Wostenholm is possibly the most famous name in cutlery. These two, once great rival companies have sat alongside each other in The Egginton Group since 1986.

Although Wostenholm was reputably formed in 1785, it took three generations and one name change for the company to really make a mark in Sheffield’s cutlery history. Originally the family name was spelt ‘Wolstenholme’ but, story has it that George Wostenholm the second found this name too long for smaller knives so he omitted the letters ‘l’ and ‘e’. The name has been spelt Wostenholm ever since. The second George Wostenholm also built the Rockingham Works (known locally as the Rockingham Wheel) in around 1810. Knives made in this factory and marked “Rockingham Works” are highly prized by knife collectors to this day.

In 1831, the famous I*XL trademark, which had first been registered in 1787, was assigned to Wostenholm. It was the third George Wostenholm who ensured that this trademark became arguably the world’s most illustrious and best loved knife brand.

Wostenholm’s dedication to his company and its products meant that the I*XL trademark has come to be regarded as the absolute pinnacle in knife manufacture.

An ambitious industrialist and fiercely determined salesman, he came to the company’s helm in 1833. The company had already taken its first steps into the American export market as early as 1830; however, it was the third George who made numerous gruelling sales trips to America. This was at a time when the trans-Atlantic passage would take many weeks. Demand from America for superior quality cutlery was growing and George Wostenholm’s efforts had made certain that the finest cutlery of the time, his I*XL knives, were the knife of choice for Americans.

Trade flourished and in 1848 a new factory, the fabled Washington Works on Sheffield’s Wellington Street, was opened.

As the popularity of Wostenholm’s knives grew, so too did Washington Works and it soon became nearly four times its original size, employing over 800 workers.

Wostenholm was now making knives in a volume never witnessed before. It is important to note though that George ensured that quality was never sacrificed and knives continued to be made by the finest cutlers using only the best materials. For the Great Exhibition of 1851, to demonstrate the height of their craft, Wostenholm made three exquisite hunting knives from designs by noted English artist Alfred Stevens.

George Wostenholm, after having reportedly declined the position on a number of previous occasions, finally became Master Cutler 1856. He also held the office of Justice of the Peace for Sheffield. His influence on the city of Sheffield was considerable. He purchased an entire suburb of 150 acres and designing the streets to be laid out to reflect the leafy residential roads of the villages he had visited in New York State. The Sheffield road names of Wostenholm Road and Washington Road as well as Wostenholm’s huge house Kenwood Hall (now a hotel) are lasting reminders of his impact on the city.

Wostenholm’s influence on history was also felt across the Atlantic. Wostenholm had begun making hunting knives in the 1830’s. Many of these were exported to America to keep up with demand for highly crafted knives in this incredibly turbulent time in American history.

There are two claims made about Wostenholm and the relationship with one of America’s most famous sons, legendary frontiersman Colonel James Bowie. The first claim is that Bowie ordered knives for himself and his close friends directly from Wostenholm.

The second, more famous claim is that, on March 6th 1836 when Bowie died at The Alamo while General Santa Anna’s Mexican Army attacked, a knife found on his body was one made by Wostenholms. Whether or not these stories are true is impossible to say for certain as company records from that period no longer exist, but it is nice to imagine that the paths of these two great men once crossed.

What can be said for certain is that Wostenholm’s dedication to his company and its products meant that the I*XL trademark has come to be regarded as the absolute pinnacle in knife manufacture.